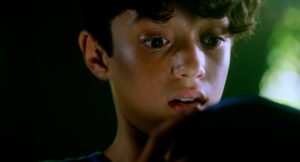 Followed by Q&A with Filmmakers & Cast.

Purchase your in-person ticket on Eventbrite here and online pass on FilmFestival Plus.