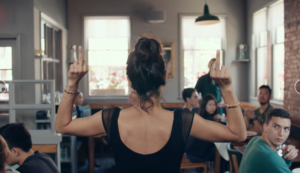 EVERYTHING IS WONDERFUL is a slice-of-life showcase of a new friendship between two European immigrants, Maria (TONIA SOTIROPOULOU) and Lena (PIA MECHLER), spanning one intense week in New York. They struggle to find happiness as they test the limits of their freedom and friendship.
Living a life without financial burdens, German-born Lena becomes increasingly bored with her seemingly carefree life in her beautiful Brooklyn apartment. Maria, a former Greek soap opera star, now waiting tables, mourns her unfulfilled dreams of being an actress in New York while feeling the pressure of settling down in a traditional married life, despite her preference for short-lived affairs. Everything could be wonderful, but somehow it isn’t.

After Lena discovers her husband cheating, Maria and Lena move in together and launch a crazy week of partying. But nothing really changes and soon old patterns of dysfunction and destruction creep back into their lives keeping them stuck in their passiveness.

Things escalate when Maria has an awkward, misogynistic audition and Lena receives a surprise visit from her successful lawyer sister. Maria and Lena decide to flee to the Hamptons. There, the beautiful nature contrasts their crass behavior and forlornness. Just when they finally begin to address their real issues, their friendship takes an unexpected turn.

Pia Mechler is the director, writer, and lead actress of EVERYTHING IS WONDERFUL. She has worked in the film business for over 10 years. After growing up in Germany with a German father and Chilean mother, she studied film at the acclaimed European Film College in Denmark. Here she completed a curriculum focusing on performance, writing, directing, but also Film History and editing intensives.

Upon her return to Berlin after graduating, she was approached while literally walking down the street one day, to read for a highly rated German television series. She was offered and took the recurring guest role.  Many roles for TV and Film followed.

Pia spent 2 years as the singer of the Electronica/Rock band M.A.U., signed to Universal Music Portugal.

Pia’s first part on British TV was in The Color of Magic alongside Sean Astin and Sir Jeremy Irons in 2008. 2009 the lead role of Gaby in the British Indie Invisible Eyes followed and earned her raving critiques.

In 2010 she moved to NYC. She is the author of the novel Remisuri, published by Shelff Germany in 2015. She also wrote, directed and starred in the web series Almost Settled.

As an actress Pia can next be seen in Weinstein’s The Upside alongside Kevin Hart and Brian Cranston.

EVERYTHING IS WONDERFUL is her directorial feature film debut.