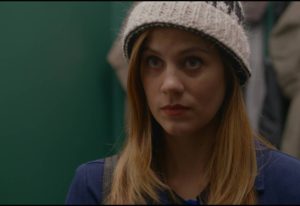 Charlie throws New York’s best parties; where downtown artists, uptown intellectuals, hipsters and hangers-on gather to drink, dance and be seen. Yet right under the surface of the decadence is fear. Fear of success, fear of being alone, and fear about what the world looks like when the party’s over. Tonight is going to be one of Charlie’s most memorable parties. It’s also her last, but not even she knows it.
Lana is Charlie’s best friend. An artist and activist, she cares too much. About her work, about fame but especially about Charlie. Trapped in a complicated relationship, Lana’s growing attraction to a newcomer to Charlie’s world, Hollis, calls into question all her relationship especially her friendship with Charlie. A friendship that neither of them understand. The more Lana learns about Charlie the more she questions the direction of her own life. What neither knows is that this is their last night together

A born and raised New Yorker, Amos Posner fell in love with film after unintentionally becoming a movie critic for The Daily Cardinal at the University of Wisconsin-Madison. The Cardinal is also where he began working with co-writer Joe Uchill. Back in New York, he took every production or development job he could get, even briefly serving in the costume department of a Bollywood film before working at the feet of such filmmakers as Bennett Miller, Scott Macaulay, Gary Winick, and Ted Hope. Working under Hope at This Is That, he met April Lamb, who ultimately became his producer. This led to a string of short films together: Central Park Joker, Perspective, and And… A Fragmented Biography. His first feature film, B-Side, premired at the Newport International Film Festival in 2013.