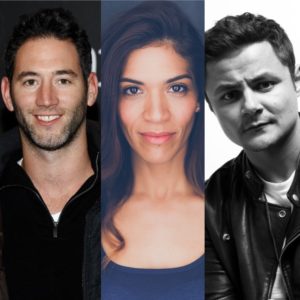 Actress, Voice Over Artist, Writer, and Director LAURA GÓMEZ has been making a name for herself in the entertainment industry over the past decade in New York City. She is best known for  transforming herself into Blanca Flores, a cunning and disheveled inmate on the smash NETFLIX hit series Orange is the New Black. Some memorable moments for Blanca include managing to hide a cellphone within the prison wall of a restroom stall to talk to Diablo, and defying authority and starting a rebellion by standing up on a table at the end of Season 4. Season 6 of the award-winning series premiered on July 27, 2018.
On the film front, Gómez has been seen in Exposed as “Eva De La Cruz” opposite Keanu Reeves, Ana DeArmas and Mira Sorvino and in the Dominican Film Sambá, directed by award-winning filmmakers Laura Amelia Guzmán and Israel Cardenas, which premiered at the Tribeca Film Festival in 2017. On television, aside from OITNB Gómez recurred as “Selena Cruz,” a former prostitute working as a sex trafficker enforcer, on the popular NBC show Law & Order SVU and on the HBO MiniSeriesShow Me A Hero [created by David Simon and directed by Paul Haggis] which tells the story of the Yonkers desegregation crisis of the 1980’s. Gómez started her journey in her native country, Dominican Republic, studying advertising with a focus on television production.  After growing up in Santo Domingo and working as an actress and journalist, she moved to New York at 21 years old to study acting professionally. Within three years of being in the states, she had landed theatre and voiceover work. Today, Gómez is a member of Spanish Repertory Theater, where she has participated in critically acclaimed plays, like Doña Flor and her Two Husbands and The House of the Spirits, directed by José Zayas and written by Obie Award playwright, Caridad Svich. She is also an established voiceover actor, having worked as Spanish announcer for the brand CoverGirl, Suave Professionals, among others and has also lent her voice for the audiobooks Of How the García Girls Lost Their Accent by Julia Alvarez and The Brief Wondrous Life of Oscar Wao, by Junot Díaz.
In 2011, Gómez was a recipient of the IX Screenwriting Developing Grant from the Carolina Foundation in Spain. An aspiring filmmaker, Gómez has studied film courses at the prestigious New York University and screenwriting at the Jacob Krueger Studio, and has starred in several films including To Kill a Roach -winner of the NYU Fall 2012 Technisphere Award for Outstanding Achievement- and Hallelujah, both of which she also wrote, directed and produced. Most recently she directed and co-produced the short film The Iron Warehouse, written by Juilliard alumni, Hilary Bettis. She is also an active member of Women Artists Writing -WAW- a writer’s collective supported by Dorset Theater Festival that gives agency to female voices on the stage. Gómez currently lives in the Upper West Side of Manhattan and splits her time between New York and Santo Domingo.

ARTURO CASTRO was born and raised in Guatemala. He moved to New York at 19 to attend the American Academy of Dramatic Arts, and Vassar College. Starting his career in theater, he performed in over a dozen off Broadway productions, including the Pulitzer Prize nominated play: Elliot A Soldier’s Fugue and Ghost Dancer at the Mint Theater before starting his film and television film. He stars in the Ang Lee directed Billy Lynn’s Long Halftime Walk, Snatched with Amy Schumer and Goldie Hawn, Narcos on Netflix, Room 104 on HBO, and No Activity with Will Ferrel and J.k. Simmons. He’s currently a recurring character in Comedy Central’s Broad City, and is about to produce his own sketch show called Alternatino this summer.
ADAM MIRELS
ADAM MIRELS founded 141 Entertainment in 2016 to produce award winning and relevant narrative feature films and television. He produced MARJORIE PRIME and INGRID GOES WEST, both of which premiered at the 2017 Sundance film festival and won the Alfred P. Sloan Award and the Waldo Salt Screenwriting Award for Best Screenplay, respectively. His company focuses on developing original content and shepherding it through production and distribution. In 2018 Adam’s films had three nominations at the Independent Spirit Awards and he was personally awarded the prize for Best First Feature. Adam attended the University of Wisconsin – Madison and earned and MBA from the London Business School.