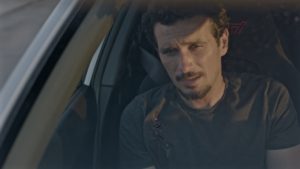 SYNOPSIS:
After being released from prison, Mallick hunts down his ex-partner’s son, Boyd, an out of work mechanic, whom he believes could lead the way to the missing stolen diamonds which landed him in lockup years earlier.

With the threat of death and chance at a potential small fortune, Boyd, his diner-shift gal Sloan and best friend Russell, a small time crook, set out on a rugged search through the treacherous desert. As events spiral out of control, the prospects of a criminal fugitive lifestyle become an inevitable reality.

DIRECTOR’S BIOGRAPHY:
Born and raised in New York City, he received his B.A. in theater from Marymount Manhattan College. His focus on directing was showcased in staged productions of No Exit by Jean-Paul Sarte and Samuel Beckett’s Krapp’s Last Tape. He studied film at NYU Tisch School of the Arts and The Los Angeles Film School, where his thesis project Split found distribution at the Cannes Film Market with Shorts International. Produced, directed and acting in by Devenish, his second short, Closure, a film about psychosis and spirituality was inspired by real events. It played twenty festivals worldwide and garnered several awards, including best dramatic short at Spiffest and Houston Worldfest. His third short, Pull Away, a post-breakup road movie just completed and was filmed in seven states on a Black Magic Design Pocket Cinema Camera. Shot in the Sonoran Desert, Misfortune, a gritty dramatic-thriller, marks his debut feature film. It boasts a well-acted ensemble cast, with the likes of Steve Earle, Kevin Gage, Nick Mancuso and a collection of strong emerging talent.

Devenish was an original cast member of the 1995 Broadway production of On The Waterfront, along with Steppenwolf founding member, Terry Kinney; David Morse and James Gandolfini.